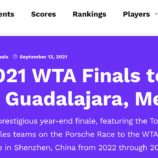 The evolution of professional sports demonstrates a growing tendency of stakeholder demands dominating the application of sound governance principles, enhanced transparency, and good corporate citizenship. The Peng Shuai case in international tennis – and how the WTA has tackled it – illustrates an interesting development when it comes to the commercialization and politicization of sports. […]

The primary goal of large professional sports team is to be the best at their sport. However, a secondary goal is to provide an entertaining and positive experience for their fans while they are at games. Teams do this through marketing efforts, in-game entertainment (apart from the actual game), promotional items and gate giveaways, and […]

CableTV.com released a story about ‘one of the heroes of basketball in the US and in the NBA’, LeBron James. According to that source, LeBron James is underpaid by $14,883,496. Arguments point toward the fact that LeBron James should make more money annually given the value, which he brings to the franchise, which he works […]